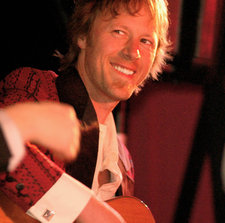 Former Victorian Marc Atkinson is well known locally and internationally as a virtuosic acoustic guitarist whose technique and eclectic musical interests are equally phenomenal. Although his rhythmically charged performances were never what one would call mellow, Atkinson has cranked it up several notches with his current project, an electrified “groove” band where intuitive jamming takes both musicians and audience on an exciting ride into unknown musical territory. This is the world premiere of the Marc Atkinson Electric Band, so here’s your chance to get your groove on!

Status: Unknown
- Last confirmed Apr. 2, 2009
Submit info on this band to our admins