With some holiday magic, Daniel Lapp brings “together” nearly 150 students a...

Classical, Romantic, Modern from Victoria BC
since circa 2006

With some holiday magic, Daniel Lapp brings “together” nearly 150 students and alumni in his legendary musical student ensembles; the BC Fiddle Orchestra, Fiddleharmonic, Old-Time DanceBand, the BC Fiddle Orchestra Provincial ensemble, Folkestra! and the Joy of Life Choir. They will perform a variety of Canadian Coast-to-Coast inspired tunes and festive favourites including the First Noel, Joy to the World, Silent Night, and “I’ll Be Home for Christmas”.

Once again, Daniel will be joined by an incredible line-up of special guests including Canadian musician, songwriter and producer Danny Michel, one of BC’s finest music ensembles, the Emily Carr String Quartet and Victoria’s favourite Jazz Singer Maureen Washington. Chiming in to bring the accompanying music are the Home for Christmas house bands: the Shiny H’ornaments, Swingin’ Shepherds, and the Strings of Lights. As in years past Daniel’s daughter, Sóley Lapp-MacDonald will join her Dad on stage for some magical, musical moments.

The 17th annual Daniel Lapp’s Home for Christmas Concert is being filmed at the Victoria Conservatory of Music, in the Alix Goolden Performance Hall and Wood Hall, as well as at other locations in and around Greater Victoria, BC. With exciting performances by Daniel’s special guests, and a few added holiday surprises, Daniel and his many musically talented friends and students will be bringing you an online holiday celebration that is not to be missed.

This year, Home for Christmas takes on a new meaning as the VCM presents this wonderful annual concert online for the first time. As families and friends will be feeling the restrictions on gatherings this season, Daniel Lapp’s Home for Christmas Concert will bring that warm holiday feeling right into your home and bring the community together through music. The Victoria Conservatory of Music is suggesting to everyone who enjoys Daniel Lapp’s Home for Christmas Concert and the joy of music, to make a $25 donation, or more, in lieu of purchasing a ticket. Your generous support ensures the VCM can continue to bring concerts to our community and keeps music education as affordable as possible and accessible to all. For information on the concert and donating visit: https://vcm.bc.ca/event/home-for-christmas/ 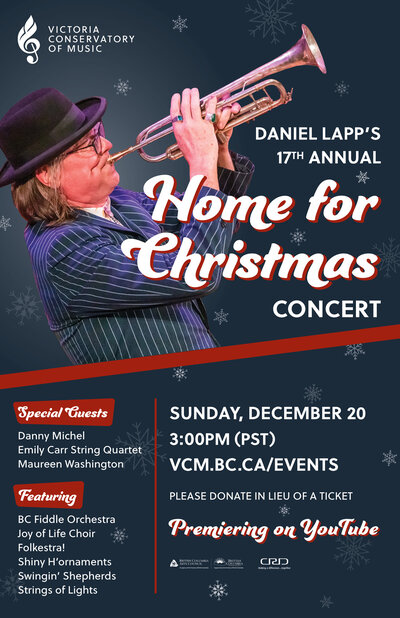