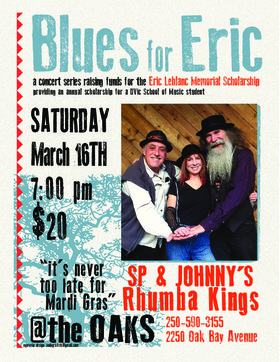 Music: Jazz / Blues
The Blues for Eric benefit concert series purpose is to raise funds for the Eric LeBlanc Memorial Scholarship at UVic for music students in the jazz studies program. We're celebrating Mardi Gras a few dates late this month, but it's never too
late to celebrate Mardi Gras.SP & Johnny's Rhumba Kings play New Orleans and blues music with what Jelly
Roll Morton used to call "The Latin Tinge." Jack Lavin, Juno-award-winning, ex-Powder Blues founding
member has joined Dave Harris (the one band band) and Sharon Wadsworth in a revived SP & Johnny's Rhumba
Kings. It's a bluesy trio who play an assortment of instruments including rub-board percussion on a repertoire of classic tunes from the City Care Forgot.(The late Johnny Shuffles from her band Elmore's Bar and Grill was her husband and is the Johnny in the current band's name.) There's lots of music history and soul in this fine local band.

Blues for Eric benefits at The Oaks are always a good time, and this promises to be a blast!

Formed in 2017 by Sharon "SP" Wadsworth (vocals, bass), Dave Harris (guitar, harp, fiddle, vocals) and Charles Gates (drums, vocals) in memory of Sharon's late husband John Fisher (Johnny Shuffles). Played regularly for over a year. Somewhat on hiatus but still making an appearance here and there. more info
Submit info on this show to our admins