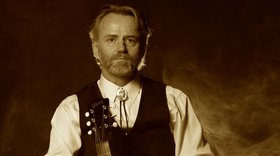 Veteran Aussie blues-roots artist Geoff Achison is a household name for many music fans in the more southerly states, a reputation he’s forged through decades making consistently excellent music. Achison first cut his teeth as the young guitar gun back in Dutch Tilders’ band in the 80’s and has maintained a grueling touring schedule ever since, both as part of his band ‘The Souldiggers’ and as a solo artist in Australia and overseas.

Achison is on the trail once again in support of his new album ‘Sovereign Town’, an acoustic, intimate, organic and decidedly song-driven collection of 12 tracks, inspired by the early days of Victoria’s gold rush, and recorded in Ballarat.

Say Geoff of the process:

“Growing up in Malmsbury in the ‘Golden Triangle’ of Victoria’s goldfields, we had dozens of dull, grey mullock heaps all around us, remnants of the old diggings. We kids would explore the discarded mine-shafts and tunnels, daring each other to leap over huge holes in the ground. It was fascinating history, so much work that had been suddenly abandoned. This inspired the song ‘Sovereign Town’, the first track written for the new album.

Then I was in Ballarat doing a guitar workshop and did a jam session with some local musicians and we just hit it off. The new stuff I was writing had more of an acoustic flavour than my regular band The Souldiggers, so I decided that I’d record in Ballarat with these new guys. The regular trips out there helped me reconnect with the history and atmosphere of the place and the whole thing started coming together.”

The Sovereign Town tour will see Geoff playing both solo and band shows along the east coast throughout August and September, with a couple of favourite festivals along the way.

In late 2017 Geoff teamed up with Andy Fry on upright bass, Dave Clark on drums and Liam Kealy on Hammond organ and headed to Ballarat, Victoria to work on the new material.

They headed to Ric Formosa’s Pilgrimage Studio not far from the heart of town and tracking began in January of 2018. Vocalist John McNamara dropped by singing harmony on some tracks.

The official release is set for August 25th distributed worldwide through Landslide Records USA, and is available at all good stores through Only Blues Music http://www.geoffachison.com