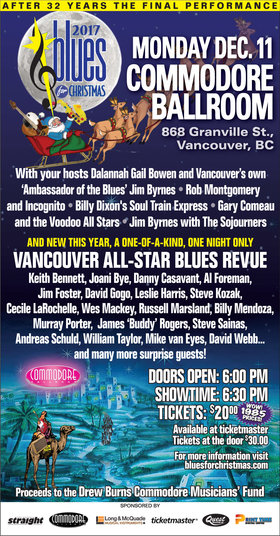 Music: Folk / Celtic / Latin / World, Funk / R&B, Jazz / Blues
32nd and Final Blues for Christmas  - Hosted by Dalannah Gail Bowen and Jim Byrnes, with 70 musicians. Joining Blues for Christmas one last time are Rob Montgomery and Incognito, Gary Comeau and the Voodoo All Stars, Billy Dixon's Soul Train Express, and Jim Byrnes with The Sojourners – plus a massive three-hour Revue featuring 40 other Blues All-Stars!! At The Commodore Ballroom, Monday, December 11. Doors 6pm, Show 6:30pm sharp. 19+ years. Tickets $20 in advance (Ticketmaster), and $30 at the door. (No service charges for this event only.)

"The Man Is Back"... his name is Billy Dixon. Billy was born in Vancouver B.C. At the age of four the family moved to St. Louis, Missouri, where at the age of ten, Billy started singing in a gospel group. At age 15 he moved back to Vancouver and continued his singing career. His first group was the Vancouver Shades. Other groups included the ... more info
Submit info on this show to our admins