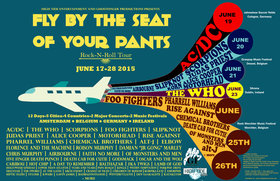 Music: Folk / Celtic / Latin / World, Hip Hop / Rap, Jazz / Blues, Pop / Rock / Indie, Punk / Metal / Hardcore
Ever want to go to Europe? Ever want to see 5 cities in ten days. Now throw in some major rock festivals and concerts and some personal time for exploring. On non-event days, you have the freedom to travel and explore at your pleasure. On event days, you have the option to mingle with the traveling group, or you may want to explore the scene on your own, at your will. This is what we are talking about. Are you up for it?

The Fly By The Seat Of Your Pants Tour is the perfect mix of whirlwind adventure and exploration for the rock-n-roll enthusiast. A jam-packed music-filled journey filled with many highlighted moments, hopping from country to country, to seek Europe’s “best of Summer 2015 music experiences” over the course of 12 days, 5 cities, 4 countries, 2 big concerts and 2 festivals. Travelers will have down days between events which to choose their own activities and destinations. On Event days your hosts will make sure your experience goes smoothy so you can just sit back and enjoy the ride. Europe is awash with festivals and concerts in the summer: from modern and alt rock to heavy metal.

Your trip will depart June 17 and arrive in Europe on the 18th. On June 18th, after nestling in your hotel, we will catch the Euro-rail to see an outdoor concert with AC/DC at the Jahnwiese soccer fields in Cologne, Germany June 19th. On June 20 and 21, we will hit the Graspop Music Festival in Dessel (Belguim) to see Alice Cooper, Slipknot, Godsmack, Scorpions, Faith No More, Judas Priest, Korn, Motorhead, Airbourne, Cradle of Filth, Papa Roach + more. Next, on June 22, we will fly to Dublin (Ireland) to see the legendary rock band, The Who, the following day on June 23 at the 3Arena. After a day off in Dublin on June 24, we will head to the Rock Werchter Music Festival in the village of Werchter in Belgium for a 2-night stay on June 25 and 26. We will witness the likes of Foo Fighters, Rise Against, Chemical Brothers, Florence and the Machine, Pharrel Wiliams, Elbow, Oscar And The Wolf, Rise Against, Ben Howard, Roison Murphy, alt-J, Of Monsters And Men, Death Cab For Cutie, Damian “Jr Gong” Marley, Balthazar, FKA Twigs + more. The adventure will then end on June 27, Departing homeward on June 28th. Each festival will be followed by a day off and are often travel days.

YOUR ROCK-N-ROLL TOUR GUIDES
Albert:
Here is MY story: Lawyer by day, rock-n-roll adventurer by night. Several years ago I began working and volunteering at festivals. In short time I began my own music production company Ghostfinger Productions. The idea for a music-oriented adventure tour occurred in the summer of 2011. A friend and I headed to Europe for some music festivals. 17 days, 10 cities, 5 countries, 4 festivals, and 3 concerts later; I had the best time of my life. Hotel, hostels and overnight trains, fancy restaurants and street vendor fair. Exhilarating, exasperating, the trip was truly an experience of a lifetime. Expect anything and everything to happen all the time, you are on the road. After I got home from Europe, I began to see how exceptional a time it had been. I am a veteran of hundreds of shows and festivals, both as a concert-goer and backstage, being on the road was a life-changing experience. Now I want to bring this experience to you. Together with Matt from High Tide we will remove the hassle and give you a worry free experience as you take flight across the cities of Europe in your pursuit for the ultimate rock and roll adventure .

Matt:
I’m the CEO of High Tide Entertainment Ltd., and for over 12 years I have been promoting some of the biggest names in music, comedy and other forms of entertainment in Victoria, Vancouver Island, all over BC and many other provinces across Canada. With over 500 concerts under my belt being the main guy in charge “at the show”, I will have lots of stories of the rock-n-roll life to share on our adventure, we will talk story. I am a seasoned traveler and use to own a hiking and kayaking ecotour company, Canadian Wilderness Ecotours, in Victoria, BC for a few years that catered to people from all over the world. I was in charge of taking tourists on full day and overnight trips and I have guided over a hundred tours, so I know how to travel with a crowd and make sure they are in good hands. I’m funny, fun, compassionate, kind and street smart, but I don’t read many books. My positive outlook on life and having a good time will make you feel like you’re traveling with family. Having a good time but being professional about is my strength. Albert, your other guide, is a good friend of mine and together we are a great team, we have amazing synergy and we work very well together. Let us show you one of the most amazing times of your life. Oh, and I forgot to say, I dance with my shirt off, so I hope you’re ok with that. Don’t worry, I won’t give you a sweaty hug unless you really want one.

The Who promo video: https://www.youtube.com/watch?v=q5riZmdJ_wk

The Foo Fighters have always been capable of both balls-out aggression and lady-killing melodic tendencies, and nowhere is this more apparent than on In Your Honor. For their fifth album in a decade, frontman Dave Grohl and company decided to split the difference by ignoring the middle ground and recording a double-disc—one CD is the heaviest, mo... more info

Judas Priest was one of the most influential heavy metal bands of the '70s, spearheading the New Wave of British Heavy Metal late in the decade. Decked out in leather and chains, the band fused the gothic doom of Black Sabbath with the riffs and speed of Led Zeppelin, as well as adding a vicious two-lead guitar attack; in doing so, they set the pac... more info

Chicago's Rise Against are the most rockin' thing to come outta the Midwest since the war. Featuring former members of the late great 88 Fingers Louie, these guys have the punk rock resume to back it up. This four-piece punk unit plays a punchy brand of melodic hardcore heavily influenced by bands like Bad Religion, Minor Threat, and Bad Brains. Ta... more info
Audio: Heaven Knows

On the heels of Monday’s night sold out show at Madison Square Garden, alt-J announce additional dates to their 2015 North American Summer Tour as well as brand new dates for this fall. The band will play select festivals this summer such as Lollapalooza and Osheaga before kicking off their fall tour with select Canadian dates then heading to the... more info
Submit info on this show to our admins