The Paper Cranes - indie pop from Victoria BC 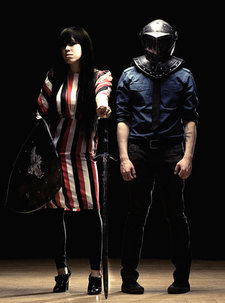 "If you're not afraid to admit your favorite Cure song was "Love Cats"; if you think Paul Weller hasn't written a classic song since "A Town Called Malice"; or if your favorite part of Funeral is the last minute of "Wake Up" where the Arcade Fire go all northern soul, then the Paper Cranes could be your new favorite band." - Pitchfork Media

On CHIVALRY’S DEAD, the Paper Cranes, voted Victoria’s Favourite Band (Monday Magazine’s M Awards), are once again doing what they do best: writing infectious pop songs that are nearly impossible to get out of your head; however this time around, there is a new level of depth to the songs. The Cranes experiment with a myriad of styles, from eerie psychedelic waltzes to orchestral post-punk, to rollicking northern soul to effervescent synth pop, to create an album that is diverse, musically complex, lyrically poignant and endlessly listenable.

ABOUT THE PAPER CRANES:
The Paper Cranes is fronted by multi-instrumentalist Ryan McCullagh and his wife Miranda Roach on keyboards. The domestic duo is joined by Braeden Patterson on guitar with a rhythm section comprised of Jeff Mitchelmore and Alex Bodman on the drums and bass guitar respectively. The five young musicians have won a sizable fan-base in their hometown and abroad with their vibrant live performance and rather dashing wardrobes.

During the three years that The Paper Cranes have been active, they’ve supported bands like Pretty Girls Make Graves, Wolf Parade, Islands, and The Walkmen amongst many others and have been showcased at Pop Montreal as well as Toronto's NXNE. Their single " I'll Love You Until My Veins Explode" was given a four star rating by Pitchforkmedia.com and the CBC named them one of the 10 bands to watch in 2008, alongside Crystal Castles and Tokyo Police Club. The band has won three out of four nominations for Monday Magazine’s M Awards for Victoria’s Next Big Thing and Most Promising Band in 2007 and Favourite Band in 2009. Their 2008 full-length Halcyon Days enjoyed a considerable run on college radio charts, and songs from the album have been featured prominently in episodes of the Comedy Network series, House Party. Their song, "Rabbit in a Snare" has also been featured in a Nissan television commercial.

For more information, music and interview requests please contact:
Theresa Micallef @ The MuseBox, Theresa@themusebox.net, 212-231-7427
No audio samples have been linked to this profile.

Status: Unknown
- Last confirmed Jul. 27, 2009
Submit info on this band to our admins