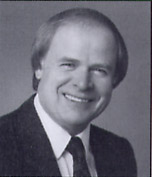 My brother John is retired from full time engagements.The past 10 years he has spent as the BC Regional Director of Music grading all the cadet bands and conducting the Honor Band on tour. He goes south every 6 months. but continues to play, and guest conduct with the Nanaimo Concert Band, along with several retired musician buddies when we all played in the Naden Band. I don't play as much now, although have done guest apperances at functions as a blast from the past. My son Michael Forbes, of the Forbes & Marshall show on the Ocean 98.5 FM has also kept me up to date. They recently interviewed David Foster when he was in town , and had a good chuckle about when David played at the Old Forge with Barry Casson, before we started our nightly 12 year stint after leaving the Empress Paint Cellar.

Joining Re/max in 1990, Larrie continues his career as a Realtor with Re/Max-All Points Realty Group in Coquitlam, BC.
After leaving "The Brothers Forbes" and The Old Forge nightclub at the Strathcona Hotel in Victoria, Larrie went to Montreal to work for a precious metals company in the stock exchange tower as a gold broker.
Returning to Coquitlam in 1985, Larrie went to work for cousin Terry Forbes and a major developer as a Project Sales Manager, marketing lowrise and highrise condominium apartments in the Lower Mainland, concentrating on the Westminster Quay waterfront, and then onto three highrise towers across from the Lougheed Mall in Burnaby.

In Victoria, Larrie's son Michael Forbes and his wife Lisa are active as radio announcers with "'The Ocean" 98.5 FM,on the "Forbes and Marshall" program. They are blessed with two children, Noah and Adam.
Continuing in the real estate market, Larrie has achieved Diamond Master Medallion status with the Greater Vancouver Real Estate Board plus "Hall of Fame" and “Lifeime Achievement” status with Re/max International, involved in selling residential and commercial properties.
To learn more about Larrie Forbes please visit www.larrieforbes.ca