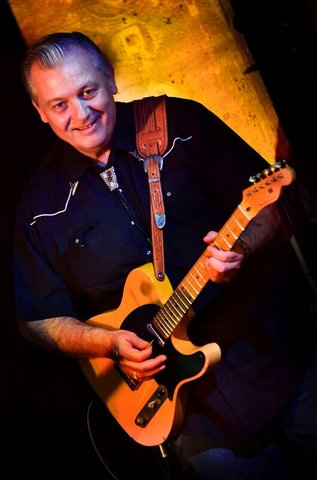 Vancouver born Steve Kozak has been a mainstay on the western Canadian Blues scene since the mid-eighties. Backed by some of Vancouver’s top musicians Kozak has built a reputation as one of Canada’s premier Blues acts and is known as the go to guy in Vancouver for the west coast Blues sound.

An accomplished and tasty guitar player with a relaxed vocal style Kozak has been winning over fans performing his up-tempo brand of jump, swing and working man’s blues to enthusiastic audiences throughout the Pacific Northwest and western Canada.
Gaining national recognition in 2013 Steve Kozak won a Maple Blues Award for New Artist or Group of the Year. Being nominated by industry professionals from across Canada.

His latest and most highly anticipated CD release Lookin at Lucky featuring special guest James Harman has been very well received by Blues Fans and industry professionals alike.
Holger Petersen host of CBC Radios Saturday Night Blues and head of Stony Plain Records says…“Really been enjoying 'Lookin' At Lucky'. Well done all round.”
Bruce Iglauer head of Alligator records & artist management says… “This is a well-crafted album, performed with taste and subtlety. Any Blues fan should enjoy it; I sure did.”

Steve was awarded The Ambassador of the Blues Award for 2012 by the Blues Underground Network.


Visit www.stevekozakmusic.com
No audio samples have been linked to this profile.

Status: Available for Shows/Gigs
- Last confirmed Oct. 17, 2016
Submit info on this band to our admins