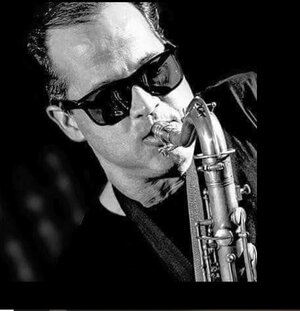 "I can still recall being in the crib (early 60’s) as they say, exposed to the sounds of Elvis
Presley Gospel, Everly Brothers and the Beatles thanks to my older Sister Kris, whom
when charged with baby-sitting me would often spin these LP’s to shut me up. As well,
my Mother’s favorite LPs were Ella Fitzgerald, Satchmo and Nat King Cole. My Father
tinkled the ivories a little and liked the Mills Brothers, Ink Spots and therefore I got an
early aspiration for R&B Music which peaked my curiosity at a very young age.
It really came together for me in the Mid-Late ‘70s when as a teen from the Fraser
Valley, I got my first LPs of the Powder Blues,  Downchild, Al Foreman and others that
made me re-evaluate the School Band Program I was enrolled in and get on the Sax.
I would have to say thanks to my Dearly Departed Mother that recognized in me at an
early age where she heard me singing harmony to just about anything that came over that
radio in the “65 Ford Fairlane. Because of her belief that I had an ear for tone and could
carry a tune at the age of six, she enrolled me in the Elementary School Band Program in
the ‘70s, I must have been in grade 5.
Coming from a Farming community, this was not always cool, having been seen with a clarinet
or trumpet case and you usually got beaten up at the bus stop when carrying said cases.
I stuck with it, beatings as well, and followed it through to High School.
I would like to say too that if it wasn’t for a local Mt Lehman, semi-retired Vancouver
‘60s Rock star, I wouldn’t have developed into a live performer.
Ron Williams, front-man for the ‘60s Rock Band, The Centaurs, ran a goat dairy farm as
a neighbor and always had band practices in one of the out buildings, where I heard
great covers of Sam Cooke, The Stones, Beatles, the Who, The Collectors (Chilliwack),
The Animals, Paul Revere, Spencer Davis etc…. were like a calling to me.
As I knew Ron and his family, I got to hang out in the practice space and copy what he
was doing and getting the phrasing, stage play and front-man down pat from a guy who
was really there at the time!
I was in my mid-teens at this point and Ron encouraged me to find some like-minded
bandmates from high school and come over to use his gear and space to get something of
my own together.
I did just that and in ’79 had formed “Excell” and played one set during Ron’s Band
break at the Abbotsford Airshow. We were received so well that they made us do it again
on the second break. That was it, I had never been so scared and exhilarated all at the
same time! I was definitely hooked on performing live.
Here I was, Singing Sam Cooke, Van Morrison and Eric Burdon at 16….so there were my
first R&B performances.
Well Abbotsford/Mt Lehman didn’t have a lot to offer in my teens. It wasn’t until I
landed on the Island here some 40 years ago. While finishing my degree at UVic in ’85,
I would go listen to live music at the Fernwood Inn which had Les Vaughn’s Jam which
gave way to Elmore’s and transported down to Hermann’s on View. I hadn’t played
Sax or Sung in 4 years at that point and with the discovery of a healthy R&B Community
here, I got back into it. It was at this time that I discovered so many local talents. Some
sadly are gone now but I have had the great opportunity to play during this time with:

Johnny Shuffles Fisher, SP Wadsworth, Charlie Gates, Bill Johnston, Bob Miron,
Sunshine Jim, Dale Brophy, Bob Johnson, Casey Dennis Ryder, Little Marty, Bill Lasalle, Don
Peterson, Blue Ray Luxembourg, Tim Murphy, Tom Leddy, Don Utley, Roy Rymer, Thor Kristensson
Dave Campbell, Dave Gray, Gary Preston, Dave Harris, Bill Gagne, Laury and Ron
Ruggs, Eugene Hardy, Ed Wright, Phil Marshall, Scott Cook, Jack Hicklin and so, so
many more!!
On the Mainland were my first two groups, Excell and No Cause for Alarm as Lead
Singer.
In later 70’s, early ‘80s, these groups played the Sock Hops at Clearbrook Jr and the
Fraser Valley College Pub Nights plus the odd house party.
Members included Tim Blanchet, Damian Eccleston, Sheila Williams, James Regier and
some other names forgotten.
On the Island I was first in “Brain Dancer” with Sunshine Jim Chambers, Tim Murphy,
Angela Carter, Fred Kramer, Ron Leppard (Huge Sax influence on me), Pete Greely.
Lots of private functions and bar gigs, some video is out there…
Next, I formed the “Blue Cats” with Don Utley, Sunshine Jim, Don Leppard, Casey Dennis
Ryder and various drummers. We played at The Carlton Club and some jams.
After that was “Night Train Revue” with Ed Cliffe, Tom Leddy, Bill Gagne and a horn
man from “Dixies Death Pool”. We played at Bart’s and others.
At this point in the ‘2000s, I went back into Classic Rock music and formed “The
BeachByrds” which had a revolving list of local talent including Scott Cook, Bruce
Wapola, Dave DeGrassi, Scott MacPhail, Bob Belknap, Peter Bobb, Greg “Murph”
Murray, Jack Jazz and others. We were extremely busy and ran for at least 6 years. Some
web links still are out there.
We opened for Long John Baldry, Prism, and the Powder Blues at the Bear Pub in Sidney
at different times.
Another rock band of note was “The JD(Jack Daniels) 5” which had Peter Willing(huge
musical mentor) Jack Jazz, Ian McDowell, Ed Cliffe, Matt Vause, Sherman Sheldon,
Steve Hanson, Henning Kanstrup, Scott Cook and Scott MacPhail as members at various
times. Very talented bunch of clowns that increased bar sales just because of the name,
due in part to the never ending rounds of Jack.
I was out of live music for 1-2 years after the JD-5 (mostly to recover my liver) and got
asked by Matt Vause to try out for the “Soul Shakers” who had reformed from the earlier
Soul Station.
I got the job and these talented pros, Joyce Allenson, Henning Kanstrup, Adrian
Chamberlain, Matt, Sean McCool (replacing Dave Anderson). Kicked my ass into shape
and challenged me to work harder on the horn and inevitably made me a better player.
We did Some Blues Bashes and a whole lotta club dates at Swan’s plus tons of private
gigs.

With The Soul Shakers changing repertoire, I left to be involved with “The Groove
Kitchen”. On an invite from Adrian Chamberlain, I was part of a three piece horn section
that had T-bone, alto sax and myself on tenor and baritone. Members were Dave
Richardson, Dave Anderson, Ben Anderson, Ron Lukawitski, Peter Arbour, Sean Burnett
and Adrian Chamberlain.
This outfit covered Funk, Latin Jazz Funk and R&B. and was hugely popular with the big
horn section and great multiple lead vocals. I was back to reading Sheet Music after many
years.
Lotsa Swans Gigs, did some Blues and Jazz Festivals .
I borrow a lot from the Blues idiom and relate it to R&R and Funk/Soul, especially in the
Groove Kitchen days, and certainly honed some skill in the feel of Soul with The Soul
Shakers, Collectively with my early foundation in classic rock it really is one big R&B
family of music I continue to participate in.
Currently, I am in Two Busy, popular Bands…..
The Lateshift Band and The Fabulous B-Sides Band.
Both are a rare opportunity to reacquaint with Friends from the past and share time with
my Idols…
Heavy hitters Dave Kissinger, Don Restall, Steve Hanson, Allan Heffer, Pete Willing of
The Lateshift Band definitely highlight my quest for Classic Early R&R and More!
Adrian Chamberlain, Carrie Young, Jeff Mousley, Matt Vause, George Bielay of The B-
Sides Band make it possible for me to refresh my role as a Lead Singer again. They are
quite Eclectic in challenging material!
As well, I did a 3+ year stint in the Tupelo Katz, Featuring Scott MacDonald as an Elvis
Tribute Band, playing the Winspear Theatre and others to fun music from the King!
Members were Tom Gordon, Eddy Lee, Geoff Petersen, Vince Pollitt…I got pretty good
on the washboard!
Reviewing Blues history with The West Coast Blues Doctors which featured Mark
“West Coast” Comerford, Norm Piercy and Geoff Petersen replacing Cole Burns replacing Sherry Clayton.
I enjoyed stripping it down and getting it right with these Two Uncle Wiggly’s vets.
A special mention to Frank Alexander for which I did time in a few of his
projects….taught me how to sell a song as a vocalist.
Albums out there including myself are “The Soul Shakers-Live at the Yale”, “The Blues
Doctors-Five long Songs” various bootlegs of the BeachByrds and Studio work
on other musicians albums including Peter Willing's "Songs for Ollie” and one
supporting a Dave Harris project.