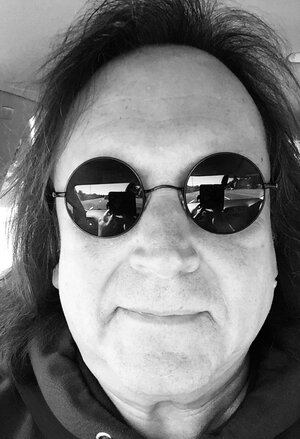 Walt's musical journey started as a young child when he was exposed to music at an early age. His grandmother was a music teacher of various instruments and his aunt was a symphony cellist but he was exposed to piano, string instruments as well as woodwinds. He chose the piano, not sure why, and started formal classical training in 1966 at age 10. Obviously he learned the classics from The Masters and was taught by Robin Wood and Winifred Scott, two very accomplished concert musicians, who had just started The Victoria Conservatory Of Music. But as every kid was back then he had been exposed to The Beatles and all the bands that followed. Then came Ray Manzerak, Mark Stein, Jon Lord and his interest was turning to rock. Then he heard the Moog solo from Lucky Man as played by Keith Emerson and that was it. He asked Ms. Scott, who was his instructor during his 4th year if and when he would start to play popular music. She scoffed at that genre but did say that it would be explored in the ninth year. He couldn’t deal with another few years of endless evening practicing so he told his parents he wanted to give up the training. Probably a mistake but it was what it was.

“During the next few years I saved up to buy a guitar and some electric keyboards and by the late 70s I had gear that was good enough to use in a band situation playing around town. So I did that for a few years, working a regular job and always upgrading my equipment. I wanted to play music as a profession so in 83 I took a 6 month leave of absence and played full time in a road band. That band didn’t last long but I was hooked. I was laid off from my job at year end in ‘83. Now I had to make a living at music. From then until 1988, I played in various bands and toured Western Canada. When our son was born, I had heard of too many stories of how some musicians would come home from touring and their children would barely know or not even recognize them and that they were missing milestones in the child’s growth. So I went back to playing locally as well as working a “regular” job as much as I could. This went on until 1996 when the local scene was slowing down and playing covers locally just wasn’t worth it anymore, financially as well as creatively. So I took a break from music.

That was when computer technology was really ramping up as far as home studio production. So after a break, I realized by 1999 that I was missing music but wanted to use computer technology to record cover tunes that I had always wanted to play as well as record some songs I had written in the 80s that I had never had the chance to play with the bands I was in during those days. I explored those avenues but also left my comfort zone and tried writing songs in the style of the 60s & 70s instrumentals that I had learned back when I was taking lessons as some relief from constantly playing classical music. Finally in 2008 I released a CD “Soundbox” under the name The Monty Casper Project. It was a collection of my attempts at smooth jazz with the hopes of cashing in on the “background music for coffee houses” market. It didn’t take the world by storm but I did win a couple of minor song writing awards, a finalist in the 2008 Toronto Exclusive Magazine Awards in the category Best Provincial Instrumental CD Album as well as a semi-finalist in The UK Songwriting Contest 2008 Instrumental category for the song Majorca from the CD “Soundbox”. I followed that CD with the release “Sunset Smooth”, a digital release of more varied pop instrumentals. Then in 2012 I released “Events” again under The Monty Casper Project moniker. This CD is a collection of instrumentals more along the lines of Alan Parsons Project and Jean Michel Jarre. Two other projects I also have on the go are Love In Stereo(Rock) and Shatz’N’Giggles(Electronic Pop/Dance/Satire). In 2021, I released a Love In Stereo CD titled Nature Calls. It was my “Covid project” that I worked on with my online collaborator/guitarist Rob Siekawitch. Like for many other musicians, that release was my Covid therapy.
Music from all my projects is available on Spotify, Apple Music, Amazon, Deezer or any other streaming/downloads platforms. I also write songs for a music licensing company and have had songs in such TV shows as American Pickers, Mob Wives, Lost & Sold, UFC, WWE, Sportsnet Canada, Knife Fight, Story of Royals, Red Oaks as well as other shows, movies, radio shows & documentaries”. Walt Gschiel