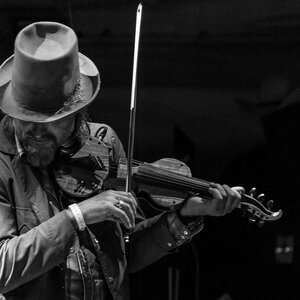 Daniel Lapp was born and grew up in Prince George, British Columbia. His mother, Charlotte Lapp, was a pianist. He learned to play the violin from his grandfather, beginning at age nine. He studied trumpet with Lou Ranger at the University of Victoria, and attended Humber College in Toronto in 1985. His old time musical environment included five uncles who played fiddle and numerous accordion playing aunts, which was a natural place for immersion into this musical genre. Lapp was a touring member of the folk rock band Spirit of the West in 1988 and 1989, but never appeared on any of the band's albums. Lapp and Linda McRae replaced Hugh McMillan during MacMillan's hiatus from the band following the 1988 album Labour Day. Lapp left when MacMillan returned before the band's next album. He has also toured with Barney Bentall, Mae Moore and Rickie Lee Jones.
As a fiddler, jazz trumpeter and singer/songwriter, Daniel Lapp has played on over 100 albums and performed across Canada, the United States, Ireland, England, Scotland, Wales, Finland and Germany with many renowned Folk and Jazz musicians. Daniel is the winner of the B.C. Fiddle Championship and has appeared as a soloist with the CBC Chamber Orchestra as well as the Prince George, Victoria, and Vancouver Symphonies. Daniel also continues to be Artistic Director of the VCM Presents “Daniel Lapp Home for Christmas” shows, and “Joy of Life Festival”. Sources Wikipedia & Victoria Conservatory of Music
Photo credit www.daniellapp.com