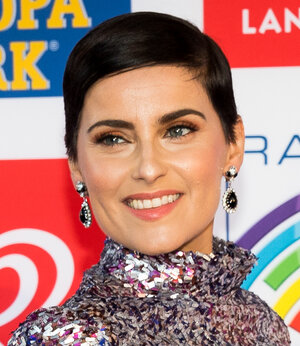 * Nelly Furtado is a Victoria born (December 2, 1978) singer-songwriter and record producer. She is known for her musical versatility and constant reinvention, commonly associated with world music. Furtado first gained fame with her trip hop inspired debut album, Whoa, Nelly! (2000), which was a critical and commercial success that spawned two top 10 singles on the Billboard Hot 100, "I'm Like a Bird" and "Turn Off the Light". The first of the two singles won her a Grammy Award for Best Female Pop Vocal Performance. Her introspective folk-heavy 2003 second album, Folklore, explored her Portuguese roots. Furtado's third album, Loose (2006), was a smash hit and became her best selling album with more than 12 million copies sold worldwide, also making it one of the best selling albums of the 2000s. Considered a radical image reinvention, Furtado continued to explore her Latin heritage while leaning heavier into hip hop. The album spawned four successful number one singles worldwide, "Promiscuous", "Maneater", "Say It Right", and "All Good Things (Come to an End)". Her Timbaland collaboration "Give It to Me" (2007) in the same era also topped the charts in the US and overseas. Furtado's critically acclaimed duet with James Morrison , "Broken Strings", also topped the charts in Europe in 2008. She released her first Spanish language album, Mi Plan, in 2009, which won her a Latin Grammy Award for Best Female Pop Vocal Album. In 2012, Furtado released her nostalgia inspired fifth album The Spirit Indestructible. She went independent thereafter, releasing her indie-pop sixth album, The Ride, in 2017 under her own label Nelstar Entertainment. Furtado has sold over 40 million records worldwide, making her one of the most successful Canadian artists. She has won several awards throughout her career, including one Grammy Award from seven nominations, one Latin Grammy Award, ten Juno Awards, one BRIT Award, one Billboard Music Award, one MTV Europe Music Award, one World Music Award, and three Much Music Video Awards and has a star on Canada's Walk of Fame. *Source Wikipedia

HAPPY 18TH BIRTHDAY
This month the Royal City Music Project celebrates our 18th year online. Alot of our longevity relies on the generosity of our donors. It's their contributions, whether large or small, that covers the overhead to maintain such an extensive and continuously updated archive . If you are a regular visitor, we encourage you to please make a donation via the secure “Donate” button on the right side of the page in the "Support This Site" box to help cover the costs of maintaining and upgrading this significant archive. If you would like to donate by cheque or money order, please make them payable to "RC Music Project". Our mailing address is listed under the contact tab on the home page (above). Any amount is helpful and all donations are greatly appreciated.