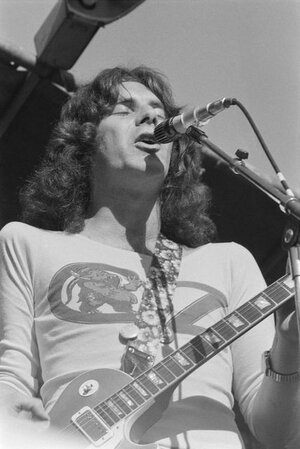 Paul Rudolph was born in Vancouver and as a child suffered from polio affecting his upper right arm and shoulder, and at the age of 10 he took up guitar playing which also served as physiotherapy for his condition. As a teenager, he played bass in local bars for blues and boogie bands such as The Midnighters and The Pannix .
At the recommendation of his childhood friend Jamie Mandelkau, he relocated to London, England joining the Mick Farren led band The Deviants as a guitarist. After recording their third album and contributing to Twink's Think Pink album, the band and singer parted company during a disastrous tour of the West Coast of North America.
Returning to England, the band hooked up with Twink forming The Pink Fairies , signing to Polydor and embarking upon a career centred on Ladbroke Grove, occasionally hooking up with Hawkwind for sets as Pinkwind. Recording two albums, Never Never Land and What a Bunch of Sweeties, Rudolph left immediately after the release of the second album to pursue other ventures, including a stint in Uncle Dog with Carol Grimes. He was invited by Roxy Music producer John Porter in early 1973 to participate in demo sessions for Sparks, before that band had found British musicians (Adrian Fisher, Martin Gordon and Dinky Diamond) for their UK re-launch.
It was at the final Uncle Dog gig that he met former Roxy Music musician Brian Eno which would lead to him contributing to four of his albums in between 1973 and 1977, namely Here Come the Warm Jets, Another Green World, Music for Films and Before and After Science. At the same time he became the main musical interpreter for Hawkwind collaborator Robert Calvert, to which Eno also became involved, recording the concept albums Captain Lockheed and the Starfighters and Lucky Leif and the Longships.
Rudolph joined Hawkwind during 1975 after they sacked their bass player Lemmy , and Robert Calvert soon joined him. They produced one album Astounding Sounds, Amazing Music followed by a non-album single Back on the Streets before he and drummer Alan Powell were sacked for trying to broaden the scope of the band's music. One of his songs "Hassan I Sabbah", a collaboration between him and Robert Calvert was included on the album Quark Strangeness And Charm. The extended CD album also includes tracks where he plays guitar and bass on early cuts of the album songs.
Powell and Rudolph formed the short-lived Kicks with Cal Batchelor and Steve York, before the pair of them worked on Mick Farren's Screwed Up EP. The EP led to the offer of an album, Vampires Stole My Lunch Money, but by then Rudolph had decided to return to his native Canada. He has since retired and lives in Victoria.* Source:Wikipedia

WEBSITE UPDATE
As you've noticed, the Royal City Music Project has updated the website with some new features including a rotating banner which currently focuses on festivals and other outdoor events of the 60's and 70's. Just click on them and check out some of our music history's most memorable moments. Our thanks goes out to Nev Gibson and Hank Lionhart for their fine work on the new look. During the month of July we have updated so many band profiles with our thanks to all the contributors. Click through to the complete updated list in real time, all linked to their profiles: Bands