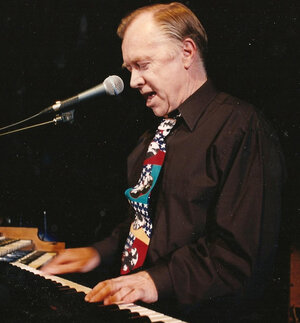 Geoff Edmunds born in Wales, grew up in a household where his father, a clerk at a flour mill who also served as a firefighter during the war, played the great guitarist Django Reinhardt on the family’s wind-up record player. One day, a merchant seaman in the neighbourhood returned from America with two records — Fats Domino’s “Ain’t That a Shame,” and Bill Haley’s “Rock Around the Clock.”

In 1957 Geoff along with his brother, rock legend Dave Edmunds and friends, formed a band called The Stompers, later becoming The Heartbeats, a group with a jazzier sound who opened for the likes of such American acts as Gene Vincent and Eddie Cochran. Sometimes, a coal miner’s son and aspiring singer from nearby Pontypridd handled vocals for the band. Tom Jones also would go on to become a regular on the charts.

In 1967 Geoff emigrated to Canada and began work with Southam Newspapers Inc. in Hamilton. He returned to music in 1985 and signed a recording contract with Rocshire Records in Los Angeles; the first album, simply entitled “Geoff Edmunds”, did very well in Canada and earned a Juno Nomination in the "Most Promising Male Vocalist" category. While living in Victoria, Geoff’s most critically acclaimed album “The Best of Geoff Edmunds” was released in 1999, containing four tracks recorded “live” in Victoria, with his brother Dave and drummer Ainsley Dunbar of Journey & Frank Zappa fame. In 2011, he released the book “Music, Money and Madness” (The bizarre Life and Times of a rock'n'roll CEO).

COVID 19 UPDATE
In these troubled times, the Royal City Music Project has been updating musician, venue and band information at a furious rate with lots of new pictures, posters, videos and other images along with updates for your information and enjoyment. During the month of April we have updated over 60 band profiles. Click through to the complete updated list in real time, all linked to their profiles: Bands