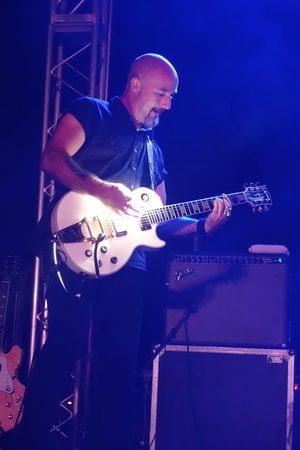 *A graduate of the Roberto-Venn School of Luthiery, James Love , an island resident, toured as a guitar technician in the road crew of Fenix TX, a Houston pop punk band. He joined the group as a full member in early 2001, replacing Damon DeLaPaz as guitarist after the departure of drummer Donnie Vomit caused DeLaPaz to move to drums. Love played on the band's final studio album, Lechuza, released in May 2001, and after a concert tour, he left the group later the same year.
From 2004 to 2006, Love toured with the Dillinger Escape Plan, and became a member of that band in 2013. Love was also in a Houston-based heavy metal band called Torches of Fury, with whom he recorded the group's self-titled 2006 EP. In Houston, he also formed Golden Axe, a heavy metal duo active from 2005 to 2011.
Love joined Men Without Hats in 2010 as a touring member of the revived 1980s band, and subsequently returned to Canada. The group's leader, Ivan Doroschuk, made Love a full member of the Vancouver-based group, and Love appeared on their 2012 album Love in the Age of War, the first Men Without Hats album in nine years. *Source Wikipedia

GET YOUR 2020 VICTORIA MUSIC HISTORY CALENDAR TODAY!
That's right folks, take a trip down memory lane every month with Victoria bands and artists from the 1950' s and 1960s hanging on your wall, fridge, or wherever a calendar goes in your home. Bands like The Pharaohs, Blues X Five, As Sheriff, Frendlin Page and 8 other artists whose picture and profile are featured every month in this limited edition release.

HOW DO I GET ONE?
You can order online through our website with a minimum $25. donation to the Royal City Music Project on the "Support This Site" button to right side of the page After leaving your e mail while donating , we'll contact you for your delivery information and receive your 2020 calendar in 2 to 4 weeks, or send a cheque/money order made out to “RC Music Project” to the address in the contact tab at the top of the page and receive your calendar by Canada Post in 4-6 weeks. All net proceeds go towards operating costs for the Royal City Music Project and its historical initiatives.