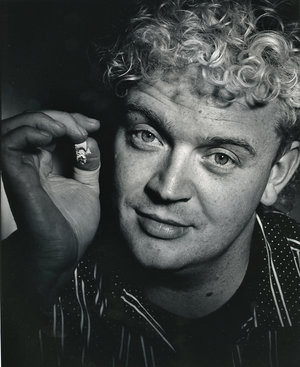 Paul Hyde was born in Yorkshire, England and emigrated to Langford on Vancouver Island sometime in the 1970s. There he met Bob Rock and they formed the new-wave/punk rock group called Payola$. Payola$ had a hit with their first single 'China Boys', and were picked up by A & M records. Payola$ released 4 albums and one EP, winning 4 Junos and countless other awards, their most famous song being 'Eyes of a Stranger', which also appeared on the soundtrack of Valley Girl (1983). A greatest hits album was released before they decided to change the name to 'Rock & Hyde' - the names of the two core members. They released one album under that name before going their seperate ways - Bob Rock becoming a mega-producer. Hyde went solo after that, and also expanded out to some other areas, including art, and appearing on an episode of _"E.N.G." (1989)_. He wrote a song for the movie American Boyfriends (1989), and had released 4 solo albums as of 2004.
Additional trivia:
Russell Crowe recorded one of Hyde's songs on his first solo album. [June 2005]
Alan Doyle, Ronnie Wood, and others have also recorded Hydes songs
He is the father of beat-boxer Emotionz (David Nelson) and singer-songwriter twins Dani and Lizzy Nelson.* Source IMDB.com

VICTORIA SKA & REGGAE FESTIVAL
Coming up June 19-23 is the 20th anniversary of this great event. For more information Click Here

VICTORIA JAZZ SOCIETY
To find out more about them and the TD Victoria International Jazzfest June 21-30 , Click here