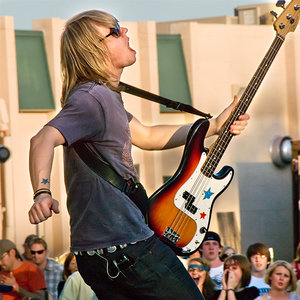 * Bryce Soderberg was born in Victoria, British Columbia, and raised just outside Victoria in the Municipality of Sooke. He started playing bass at a young age and developed his musicianship mostly in his basement with his two brothers and their band. He graduated from St. Michaels University School then after attending two years of College in Quebec, Canada, he moved to Los Angeles, California when he was 19 to pursue a professional career in music. In 2002, he joined Elektra recording artists AM Radio, under the management of Rivers Cuomo. After Elektra Records folded, AM Radio disbanded. During this time, as a vocalist/songwriter he performed with The Celebrities, and Tomorrow And Everyday After. In August 2004, Soderberg joined Lifehouse after a recommendation from former member Sean Woolstenhulme.
Along with members Pelle Hillström and Kris Persson, Soderberg has an alternative side project based in Los Angeles called KOMOX. They launched a Pledgemusic campaign in September 2014 and released Dreaming Awake, Vol 1. during the week of January 3, 2016. A reworked version of Soderberg's song Stardust, co-written with Hillström for the KOMOX project, appears on Lifehouse's 2015 album
* Source: Wikipedia

VICTORIA JAZZ SOCIETY
To find out more about them and their upcoming shows, Click here