Damian Graham - i hit things.... from Victoria BC

As well as playing drums Damian regularly works in the chair of Producer, Engineer, Graphic Designer (this site), Composer and has run his own label Bagel Boy Records for the past 10 years.

Damian's production, engineering and graphic design credits include the bands "Dr. Tongue", "Gypsyland", "Tongue and Groove", his latest release as a band leader entitled "Digs" and the ever popular "Nicol Street Christmas I, II and III" which feature many artists including musicians from The Odds, Wunderbread, David Gogo, Camille Miller, Gerry Barnum, Paul Laine.

As a composer Damian has written a large collection of material encompassing a wide variety of musical genres both on his own and in collaboration with other artists. Many of these compositions have been featured on radio and on his label. In 2000 co-writes with Michael Kaeshammer appeared on the later's Juno nominated album "No Strings Attached" (Alma Records)

Damian also maintains a busy live and studio schedule with his own ensemble and as an in demand session player. Having performed all across Canada, USA and Europe, Damian has been busy changing the way people think about the drums. 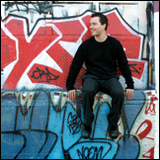