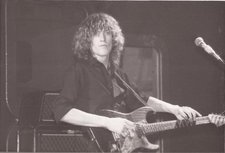 Ian began playing violin at age 5. He studied classically for over a decade including Toronto Conservatory theory, harmony and composition. He continues expanding his skills even as a professional musician, currently studying jazz piano with renowned jazz educator and author Lloyd Abrams.
Beginning his career as guitarist/violinist for Capitol/EMI recording artists Strange Advance, he has appeared on hundreds of recordings and has played live or in session with innumerable artists including Mike Reno (Loverboy), Bobby Kimball (Toto), Jimi Jameson (Survivor) Shania Twain and countless other talented musicians and singers worldwide.
Over the years he has written and co-written several radio singles including a #2 chart position in Europe. He also co-wrote and played violin on the 2013 GRAMMY® nominated album Rumbadoodle with Singapore based producer Arun Shenoy. He has collaborated with producers, songwriters and musicians worldwide since 2000 through his site efiddler.com and is the leading provider of digital violin content.
Among countless performances, the most unusual gig to date would be playing violin for the King and Queen of Malaysia at the royal palace in Kuala Lumpur.* Biography from the website ruckusdeluxe.com