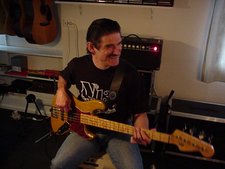 Below is an e mail sent from Ed to Craig Scott:

Yes , I was in As Sheriff - After the Fast Flying Vestibule broke up , Andy
Godon (lead guitar) asked me to join him in a new band.
I was deep into the Victoria folk scene, having played at Jon York's
Music Hall and The Bunkhouse in Vancouver - but I hung out at the FFV
house in Vic. and I really wanted to be in a band! Nine in the Fifth
Place was our first gig. We were stoned and scared shitless, but it
went o.k. and others followed.....the FFV spawned both As Sherrif and
Moxie, who I always thought were much better than us. I always
thought that "the Americans" or draft dodgers came to Canada and
brought a good energy with them - starting bands, music venues and
the Vic Food Co-op among other things.
I left Vic in 1972 to seek my musical fortune in Europe (London) and
be closer to my girlfriend Linda who was studying in Madrid. I played
folk venues in Spain, alone and with "Guns and Butter", a crazy
American army brat couple - eventually went up to London and for 1
1/2 years went to auditions and played with Paul Rudolph (from the
Hydro Electric Streetcar) in Uncle Dog with Carol Grimes. I met a
Canadian sax player there - Ken Spence - who eventually invited me
to Amsterdam to play bass in his band "Stonedelight". In amsterdam I
found an open music scene with a few good venues where we played our
Philly sound and soft soul stuff with two black singers. Within a
year we had a single contract and were recording in Island Studios in
London. Funny how life goes in circles....anyhow, I met a fine lady
jazz singer here, and stayed. Got into studio work, touring in Europe
- Germany is an hour away, and the best market for music over here -
toured for 3 years with Jango Edwards, a nutty rock clown from Ann
Arbor,Michigan - we played all over Europe, Israel and the Just For
Laughs festival in Montreal. Since then, I played with Dutch bands,
some times with Americans - Coco York (New Orleans) and Steve Yellick
- (Berkley) And recently with Josie Khun (Nashville) We were playing
in France with Josie when I met Jenny Kerr- and she immediately asked
me to tour with her....somehow I managed to fit it in with my
furniture buisiness.....I love the road - it's all I want to do. But
it doesn't pay the bills like making furniture. So that's how I ended
up here .....I'm married to Leora, a nice Jewish girl from New York,
Texas and Israel; we have a daughter Shai, who flew off to India
today with Going Global, a Dutch initiative that supports education
in the poorest areas of third world countries.
Last week I had a run in with our dimension saw, cut up 2 fingers on
my left hand (not off!) , so I won't be playing for a while. I'm such
a klutz. You'd think at 60 I would know better. I love it over here,
not just because everything is easily available (!) A friend of ours
calls Amsterdam "Disneyland for adults." I feel privelidged to have
grown up in Victoria, and to have seen a little more of the world and
to play music for people anywhere. I've been playing with locals in
the S.A.E. studios where young talented budding audio engineers can
learn on state of the art computer systems and old analogue
gear....lucky kids, these days.....but I look forward to the next
time I can visit B.C. and my sister who lives on Shuswap Lake. I remember
you well from the club, and the Gonzales Bay scene.....I
'm amazed that there are sites like the RCMP where so much research
has been done on the Vic. scene - we just did what we did and now
we're "veteran musicians" wierd, huh?