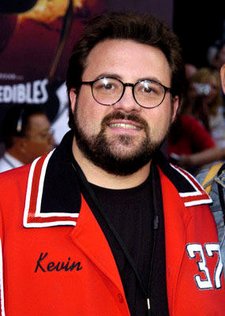 Kevin Smith grew up in Highlands, New Jersey. After graduating from Henry Hudson Regional School, Smith enrolled at the New School for Social Research to study creative writing, but dropped out before completing the program. He then shifted west, enrolling at the Vancouver Film School, but soon found himself disillusioned, again dropping out and heading home.

After returning to New Jersey, Smith took a job as a convenience store clerk, eventually inspiring the script to his first film Clerks.. Cobbling together $27,000 from parents, loans, and the sale of his comic book collection, Smith and Scott Mosier, a friend from Smith's days at the Vancouver Film School, began production on the black-and-white film. To cut costs, Smith employed friends and local actors to play the roles, and filmed at night in the same convenience store where he worked during the day.

Clerks. debuted to wide acclaim at the 1994 Sundance Film Festival and was almost immediately snapped up by Miramax. Initially, the film was given an NC-17 rating, almost exclusively for its crude dialogue. By comparison, Oliver Stone's Natural Born Killers received an R rating, even though it included scenes of extreme violence. Miramax and Smith entered into a court battle with the Motion Picture Association of America, and eventually succeeded in getting the film's rating lowered to an R. The film became a success on the growing independent film circuit, was shown during non-concert hours at Woodstock 1994, and eventually earned a limited national release near the end of 1994. In ensuing years, it became a far-reaching inspiration for budding directors, proving that it was possible to make a movie for $27,000 and have it see wide successful release.

In 1995, Smith wrote and directed Mallrats, the second film in the so-called "Jersey Trilogy". Mallrats chronicles the romantic difficulties of two slackers (Jason Lee and Jeremy London) who spend their days hanging around a shopping mall. The film also featured a post-90210 Shannen Doherty and a pre-fame Ben Affleck. A more typical Hollywood comedy than Clerks., Mallrats was a failure with critics as well as at the box office, and Smith later found himself haunted by a tongue-in-cheek apology he made at the 1995 Independent Spirit Awards. Smith later remarked in his question and answer session (An Evening with Kevin Smith) that Universal executives pressured him to cut scenes, including a section where Jay (Jason Mewes) masturbates over Gwen (played by Joey Lauren Adams) while she changes clothes, and he ejaculates over the partition into her hair. According to the scene, her hair would be altered as a result (as famously seen two years later in There's Something About Mary), but the executives claimed that the gross-out factor was too disgusting to be comedic.

In 1997, Smith released Chasing Amy. The film follows the story of a man (Ben Affleck) who falls in love with a lesbian (Joey Lauren Adams). Following Clerks. and Mallrats, Chasing Amy was seen as having surprising emotional depth, and was greeted with generally positive critical acclaim and modest box office success. Of Chasing Amy, Smith indicated that Clerks had been almost overpraised, while Mallrats had been overbashed, which put him in a very freeing position: people couldn't say much better things than they had of Clerks., but couldn't say much worse things than they had of Mallrats. This status made it easy for Smith to be very honest and vulnerable in making this third film.

1999 saw the release of the controversial Dogma. The film followed the plight of a barren and disillusioned Catholic (Linda Fiorentino), divinely chosen to prevent two renegade angels (Ben Affleck and Matt Damon) from returning to heaven by means of a loophole in Catholic dogma. As God had mandated that they could never return to heaven, the angels' actions would prove God wrong, causing a contradiction and resulting in the termination of existence. Despite the fact that Smith was a practicing Catholic, several religious groups claimed that the film was blasphemous and organized protests. Smith noted that several of the protests occurred before the film was even finished, suggesting that the protests were more about media attention for the groups than for whatever was controversial about the film. (Smith, accompanied by friend Bryan Johnson, anonymously joined one of the protests carrying a sign that read "Dogma Is Dogshit", and was even interviewed in his protestor guise by a local tv station.)

In 2001 Smith released what he claimed would be his final film featuring Jay and Silent Bob, Jay and Silent Bob Strike Back. In the film, the duo attempts to travel to Hollywood to stop production on a film based on their characters, and take revenge on those who post negative comments about them on online message boards. Littered with inside jokes and cameos from characters in previous Smith films, the director called it a "valentine" to his fans. While the film featured appearances from numerous View Askew veterans, Jay and Silent Bob Strike Back also included a lengthy and star-studded cast and cameo list that included Shannon Elizabeth, Eliza Dushku, Will Ferrell, Judd Nelson, George Carlin, Carrie Fisher, Seann William Scott, Jon Stewart, Jules Asner, Steve Kmetko, Tracy Morgan, Gus Van Sant, Chris Rock, Jamie Kennedy, Wes Craven, Shannen Doherty, Mark Hamill, Diedrich Bader, Alanis Morissette, Morris Day & The Time, Jason Biggs, Adam Carolla, and James Van Der Beek.

In previous years, Smith had quietly performed question and answer sessions at colleges around the country. Given that he couldn't reach every college, and that he wanted a permanent record of what went on at these events, Smith filmed two of the sessions and compiled a DVD, titled An Evening with Kevin Smith. His candid and humorous answers give many insights to the story of his journey as a filmmaker. The DVD was such a success that Smith decided to film a second DVD at sessions in Toronto and London, which should see release late in 2005.

In 2004, Smith released Jersey Girl about a man (Ben Affleck) struggling to raise his daughter after the death of his wife (played by Jennifer Lopez). George Carlin and Liv Tyler starred alongside Affleck in the comedic drama. The film opened to mixed reviews and lackluster box office, largely a result of the blacklash surrounding the extensive media attention given to Affleck and Lopez's off-screen relationship, as well as the negative critical and box office results of the couple's 2003 film Gigli. Smith referred to the film as his "fatherhood" movie, and found bittersweet comfort that he was able to share the film with his own father just prior to his death.

2005 has proven a busy year for Kevin Smith, as he will begin filming a sequel to his first film Clerks., tentatively titled The Passion of the Clerks. Unlike the first movie, the sequel is rumored to have a budget of $250,000 to $5,000,000. According to Smith, the only returning characters from the previous films will be Dante, Randal, Jay and Silent Bob. He will join Jason Lee in Richard Kelly's Southland Tales. He has also snagged his first major acting role with Catch and Release, a film staring Jennifer Garner.