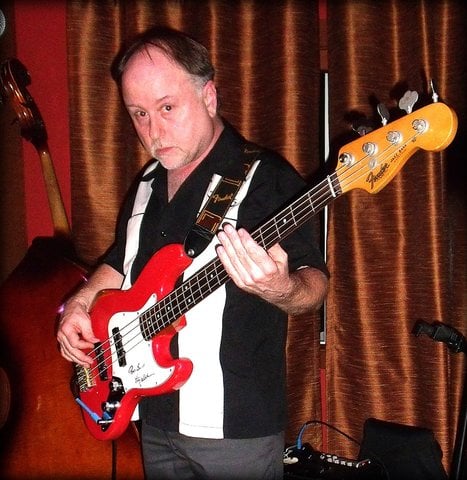 I've been a bassplayer for....40 years now,yikes.. I have been the bass player on over 1000 c.d. projects (songs) and recorded with many artists ranging from Ken Hamm [standup] to Pamela Tessman[Keld] fretless,and many,many of Michael Behm's songs including "It's My Time" for American Idol.Recorded bass with Paul Rogers drummer Rick Fedyk at The Armoury Studio in Vancouver recently,I played bass/toured with The Inkspots and The Platters (for the last 15 years) when they come out to the west coast.I also worked in the music retail business for 25 years recently at Long & McQuade in Nanaimo,BC.I am also a registered FENDER guitar tech. I am also now somewhat involved with Harrison Mixbus consoles out of Nashville via a demo/instructional video through producer Chris Raines. See my Fandalism for more stuff,thanks.I have uploaded a few songs written by Michael Behm and 'featuring' me on bass,thanks Michael!! see "lyrics" for info and song credit....Even snuck my country swing song on here called 'I'm still crazy over you'...wrote it with my girl Gayl in mind. P.S. Just move to an awesome town called Shelbyville south of Nashville Tennessee!! .... I'm looking forward to Hearing,Meeting,Recording and Playing with some of the fine musicians and bands here in beautiful Tennessee!!............. [email protected] http://fandalism.com/bassman1901 https://soundcloud.com/scott-macleodRock and Country