Pied Pumkin - folk from Vancouver BC 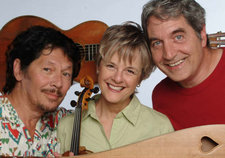 In the mid 70's Pied Pumkin's mixture of timeless music, fearless arrangements and irreverent humour defied categorization and made the group a West Coast favourite. Their combination of dulcimer, violin, guitar and flawless harmonies created a sound completely original and enduring. They self-produced two albums which sold over 30,000 copies for their own Squash Records--one of Canada's first independent labels.

Status: On Hiatus
- Last confirmed Feb. 6, 2020
Submit info on this band to our admins