Mae Moore - songwriter from Victoria BC 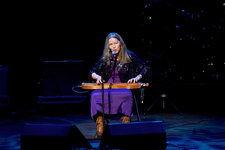 Mae Moore is a songwriter, performer, visual artist and international recording artist. The first 4 recordings were released on the Epic/Sony label and her fifth, on Jann Arden's 'Big Hip Records,' was released in the summer of 1999.Next came her best recording to date,the jazz tinged-acoustic "Funny World", recorded in Victoria, and produced by Joby Baker. Her most acoustic recording and one that takes her back to her folk roots was recorded in 2002 with her husband, Lester Quitzau. "Oh My" was nominated for "Roots Album of the Year" In 2011 , Mae released Folklore, produced by Joby Baker and was nominated for 2 Canadian Folk Music Awards. In 2012 Mae is nominated for Female Songwriter of the Year for the Vancouver Island Music Awards.

Status: On Hiatus
Mae is signed with Global Arts Management and represented by Bob Wilson at Live Tour for tours. - Last confirmed Mar. 19, 2020
Submit info on this band to our admins