BAPCO Paint Band from Victoria BC 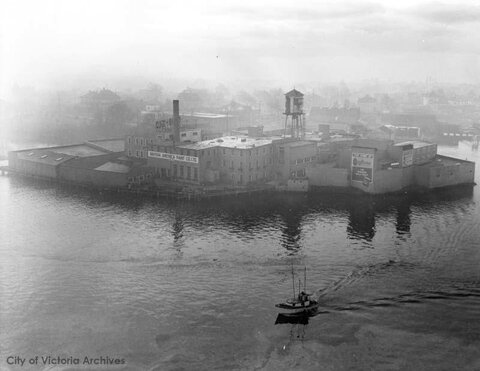 from Victoria BC
Broken Up - Confirmed: Jan. 13, 2022 (Archived)
Photo credit City of Victoria archives.
The British American Paint Company was located at the site of the Laurel Point Inn. Employees had a group that played around Victoria during the late 50s early 60's (We're still looking for their real name).
We are looking for any pictures/information about the band and any other members that may have played with them. I am also looking for pictures (musical or otherwise) of Chuck Aikin, Bob Nichols and Peter Thompson to add to their profiles on the Royal City Music Project website (www.rcmusicproject.com/bapcopaintband). Thank you in advance for any help. You can contact us at [email protected] .
"In addition to Bob (no vocals incidentally; later he added vibraphone) and I (trumpet by the way; later valve trombone) the original group got together to play for a Christmas party. The musicians for that entertainment included Don Beale (trombone), Jack Okell (alto sax), Terry Budd (possibly on drums; Terry played with Bob and I later) and possibly others. As I recall, it was a pretty ragtag sound that came out of us, but it gave us a start locally.
At one time we toyed with the idea of changing the name of the group to The Laurel Point Salon Group, which seemed appropriate, but nothing came of that.
Bob and I gigged a lot of places over the subsequent years; primarily we were house band at the Victoria Golf Club once a month or so. A fine addition for several years was vocalist Gina Mayes, who was BAPCO's receptionist, and who contributed very much to the sound of the orchestra." Quote from Peter Thompson
No audio samples have been linked to this profile.

Status: Broken Up
- Last confirmed Jan. 13, 2022
Submit info on this band to our admins