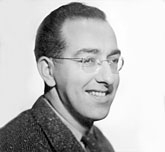 A Victoria native, he was born on Caledonia Avenue and the first son of Robert John and Sarah Ethel Porter. His interest in music started with the violin at age 10 and then changed to piano and trumpet. As a youth he worked at Kent's music store on Fort Street in the radio and record section. Soon he started a small group of musicians in the early 30's which later grew to a 17 piece band which included his brother, Vernon on string bass. As the orchestra leader, he played trumpet and his band opened for such names as Harry James, Duke Ellington and Tex Beneke, when they came to the Memorial Arena. He played for dances at the YMCA and The Club Sirocco, where he opened a music and dance studio and was soon teaching his future wife, Lorna. His orchestra would often do charity events such as the "Red Cross Pint Parade" in 1951 at the Odeon Theatre where the only admission fee was to pledge one pint of blood to see a stage show. As the business grew to include the sale of musical instruments, he needed more space and moved to several locations over the years, eventually buying his own building on Caledonia Avenue in 1972. He employed many teachers and sales staff to handle the pupils and instrument sales including organist, Reginald Stone, with whom he performed on piano at different events. He was the first agent for Titano Accordions in Victoria and later became the agent for Baldwin Pianos and Thomas and Kimball Organs. He started many aspiring students on a musical career and enjoyed spreading his love of music onto others. He retired in 1988 and began to play out at seniors retirement homes with his good friend, Reg Stone. He was a kind, generous and gentle man who was very modest about his accomplishments.

A guest wrote: I was just reading about Bernie Porter and the various instrument companies he was agent for. In addition to the ones you mention, he was the agent/seller for Stewart Drums which later changed its name to Tama Drums. He also caused a bit of a tempest when he imported a Vox Super Beatle and sold it to Art Demeulles. There was already an agent for Vox in Victoria at the time in a music store on Yates near the old Plimley’s Auto. The new agent for Vox was most upset about the sale, and raised all kinds of noise about it. Consequently, Bernie didn’t order any more Vox amps. He did sell the incredibly heavy Baldwin guitar amplifiers (I had a bass amp from him and used it for a whole summer at Butcharts Gardens). Just another interesting bit of Victoria music history.
George Kilvington