Randy Bailey - Frontman/Guitarist from Victoria BC 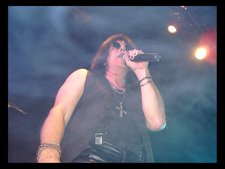 Randy Bailey has been a performer for over 40 years... heavily steeped in a mix of British rock, southern blues and California party rock. a former member of "Cold Sweat", "Unchained" (tribute to Van Halen), "Frenzy", "Sidewinder","November Witch" (tribute to OZZY ) "The Magic Carpet Ride". A Seattle based band that has original music and is licensed by Steppenwolf as a tribute band, Toured with multi-platimum artists "Iron Butterfly" on their FINAL North American tour..( as one of the original members Lee Dorman passed away in late 2012...Randy has the ability to front the band with a guitar or without.... that span a career from 1965 (Gumby and Pokey commercials) to the California state fair in 1985 ("Unchained") currently a member of "SPLINTER a three piece rock band in Victoria...He is available for studio projects and has a full size 3 way PA System for hire as well.He has worked as a sound engineer both locally and in the USA... mixed members of "The Paul Rodgers Band and "The Runaways, and countless local bands