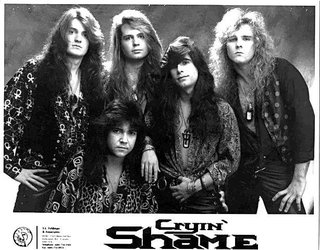 Hard Rock from Vancouver BC
On Hiatus - Confirmed: May. 1, 2020
Cryin' Shame were active in the early 90s across Western Canada playing in both the cover and original music scene. The band was originally founded by Colin Gorling (guitar) and Steve Timuss (vocals) but they were quickly joined by Joe Kerekes (guitar), Phil Coelho (bass) and Dave Belland (drums) - all of whom rounded out the final touring version of the band. Their style was distinctively blues based hard rock but leaning more toward the harder edge sound coming out of the LA music scene at the time. Original songs such as "Edge of Seventeen", "Take Me Back" and "End of Your Line" were among the more popular songs the band wrote/performed. The band was booked by S.L. Feldman & Associates and managed by Larry Gillstrom of Timeless Productions.
No audio samples have been linked to this profile. Status: On Hiatus
We’ll do it all again in the next life. - Last confirmed May. 1, 2020
Submit info on this band to our admins